It looked like Milwaukee might cruise to a win in the season opener. The opening frame saw the Bucks get out to a quick 36-23 lead. But Hornets guard Kemba Walker got hot – he ended up with a game-high 41 – and Charlotte battled all the way back to make it close. They even held a lead late in the fourth. But Milwaukee did just enough to hold on and escape with the slimmest of winning margins.

There was a good amount of anticipation heading into this one. Coming in, both teams had won their opener and the Pacers are seen as one of the teams the Bucks will compete with (alongside Philadelphia, Boston, and Toronto) for top-seeds in the East. For as much slack as the conference gets for being weak – and it is compared to the West, to be sure – those are five really good teams. And at least one of them isn’t getting home court in the first round of the playoffs. It was a sort of measuring stick game for Milwaukee and they were convincing in nearly every aspect. The Bucks had more rebounds, more assists, more steals, and more blocks than Indiana. They also attempted a pretty crazy 28 more threes and made a higher percentage.

Aspect to Iron Out: Bench Roles

We’re going to get into the minute distribution with more specificity later in this article, but in general, it seems like there’s one more bench role up for grabs. Ersan Ilyasova, John Henson, Donte DiVincenzo (surprise!), and Tony Snell have logged double-digit minutes in each of the first two games. Now, NBA coaches almost never make a full, five-for-five substitution, so these things can be kind of fluid. But amongst the other players, it seems like Budenholzer wants one more guy to emerge to cement the Bucks’ ten-man rotation on a game-to-game basis.

MVP of the Week: Mike Budenholzer

Realistically, this could just be called the “Giannis Award,” because he is far and away the most important player in terms of impact. However, we’ll try to be a little more creative and give it to the new head coach. So far, Budenholzer’s offensive system looks explosive. Most notably, it’s unlocked the passing ability of this roster (which was secretly questionable to begin with). Though it’s just two games, Milwaukee ranks seventh amongst NBA teams in assists per game.

Honorable mention to John Henson. If you told me Henson would show as much potential as an outside shooter as he has through the preseason and first two games, I would have guessed you were either John Henson’s mom or a liar.

Giannis averaged exactly ten rebounds last season. Projecting forward, he should average double-digit boards for the bulk of his career. However, aside from him, John Henson is about the only other player on the roster that is a plus rebounder relative to their position. How and where Milwaukee gets rebounds deserves some attention. 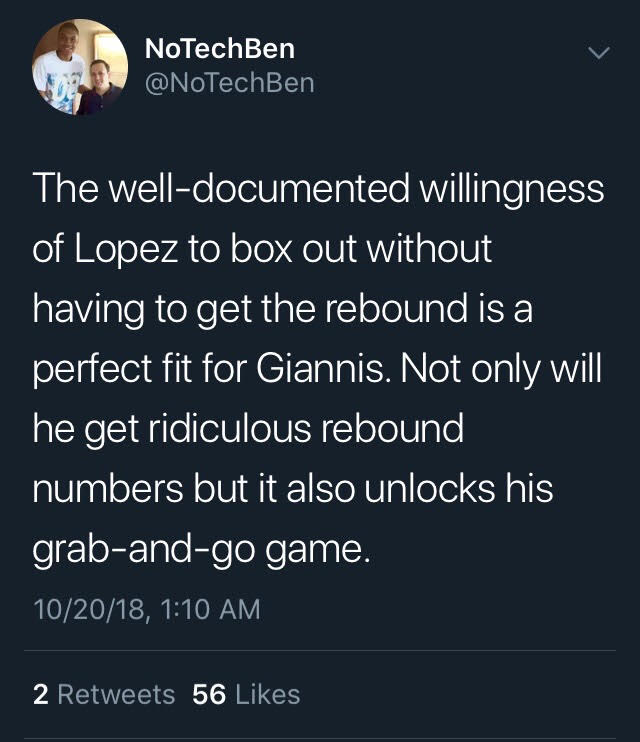 What We Noticed: Minute Distribution

How Mike Budenholzer distributed minutes in the first two games wasn’t exactly the most pressing topic amongst Bucks fans, but it was pretty fascinating, nonetheless.

With the signings of Lopez and Ersan Ilyasova, the presence of Henson, Thon Maker, DJ Wilson, and the emergence of Christian Wood, we knew going into the season there was a logjam around Giannis at the power forward and center spots. What we didn’t expect, however, is that Maker would be a healthy scratch in each of the first two games. Unless there’s a minor injury that isn’t known about, Maker, at best hasn’t done anything to impress Budenholzer; at worst, he’s in the head coach’s doghouse.

On the flip side, Donte DiVincenzo getting 20-plus minutes in both games was as surprising as Maker not even getting to suit up. Only Ilyasova has played more minutes off the bench, suggesting the Bucks rookie has already supplanted the other bench wings for top backcourt backup.

Chris Paul in Milwaukee makes too much sense

Youngin’ of the Week: New Orleans

LaFleur’s staff is forming with Aaron Rodgers in mind.

Wisconsin Reacts to Packers’ Thrilling Win over the Cowboys